When one re-examines Buhari’s path to becoming president, one cannot but admire the never-say-die attitude of a man frequently touted as being 100% committed to birthing a better Nigeria. Prior to his historic and much needed win, he lost on three occasions. Also noteworthy is that in the lead up to the election, he was maligned like never before. He was described as an ethnic and religious bigot, an impulsive dictator, and a power-hungry and self-righteous old man not in tune with modern realities. Thanks to Jonathan’s abject performance, Buhari’s wild popularity in the North, and his alliance with Jagaban (the ACN bloc), he won in spite of the no-holds-barred well-financed campaign of hate against him. While many of these descriptions of him are outright false, some are sadly proving to be true. Day in day out, his famous “I belong to everybody and I belong to nobody” claim is proving to be closer to falsehood than truth.

President Buhari, his handlers, and close associates, have a seemingly insatiable penchant for brewing controversy. In the past few months, the Buhari government seem to have made courting controversies their primary goal; the latest drama being the national address delivered in Hausa and the lingering uncertainties surrounding the President’s health. For every step Prof. Osinbajo takes to portray a presidency that’s committed to justice, unity, and fairness in the country, Buhari and his handlers firmly remind us that it is all a charade.

This latest episode in the presidency’s chaotic series -the Eid address to the nation in Hausa- is the ultimate definition of recklessness! What a height of insensitivity! The presidency comes across as the proverbial one who people are eager to burn in fire, but inexplicably aides their cause by rolling in petrol.

To put some context, the president has not been seen or heard from in public for close to two months. Due to the antics and theatrics of his close associates (possibly without his knowledge), the citizenry whom Buhari ceaselessly pledged transparency to, is in complete darkness as regards his true state of health. An overwhelming majority are not even sure if the “iron man” they voted is still the one running the show at the top or not. There’s been rumours as to him being memory and speech impaired. While it may sound uncouth to make these claims without ample proof, the deafening silence from the presidency has given room for these rumours and uncertainties to thrive. In addition, these past months have been quite testing in the resolve to make Nigeria remain one. Biafra “activist”, Nnamdi Kanu, and some groups of Arewa youths have been at the forefront of inflammatory speeches and comments. To release a national address in Hausa is bad enough, to do so given the current atmosphere is utter recklessness and insensitivity. Claiming that the speech was an interview with BBC Hausa, doesn’t help erase this anomaly. As put forward by Mr. Suraj Oyewale (Jarus) :

– If it was obtained from a BBC Hausa interview, how come it is easier for foreign press to reach Buhari than local ones?

– If it was an interview, why was it passed on as a national address?

One might inquire, why all the fuss over a “non-issue” like a national address in Hausa, especially when this may be a sincere error on the part of Baba’s handlers? The answer is crystal clear; this is not one-off! President Buhari and his handlers have repeatedly made divisive gestures; in speech and in action. He and his media aides have been reveling in shenanigans for two years. This has to either stop or at least, some members of the team get punished for these inadequacies.

An embarrassing example, which I find to be most cringe-worthy and reckless, are the President’s comments at the US Institute of Peace (What an irony?!). In his words, “I hope you have a copy of the election results. The constituents, for example, gave me 97% [of the vote] cannot in all honesty be treated on some issues with constituencies that gave me 5%”.Some jokesters unfortunately termed this thoughtlessness at as Buhari being brutally honest!

Another distasteful instance was when one of Buhari’s senior media aides, Mallam Garba Shehu, revealed that Buhari sent a letter to the Minister of Budget and National Planning, effectively authorizing the Acting President to sign the Appropriation Bill into law. For all intents and purposes, Osinbajo is recognized by the constitution as the Acting President with the attendant powers of a substantive president. It was therefore nonsensical that a letter had to be sent to practically permit Osinbajo to do what the constitution had ordinarily empowered him to do. This is evidence of the power play and incoherence within the presidency.

In yet another gaffe by the presidency, Osinbajo was addressed as “Coordinator” in the letter to NASS in a clear departure from the terminology used in previous letters. Even though, the necessary sections of the constitution were quoted, it was a needless controversy; one borne out of sheer ignorance or an undying crave for power and control.

While I agree that it’s unfair to solely blame Buhari and his retinue of aides, for the rising wave of hate speeches and calls for secession, it’s apparent that some of his words and actions have further strengthened cries of marginalization across the nation. In plain terms, the sooner the president realizes that he was elected President of Nigeria and not President of those that voted him, the better.

In terms of PR, transparency, and in many other facets, Buhari and his handlers have failed woefully. So far, they have successfully over-promised and under-delivered. Still, we have got two years to go. Two years to reverse two years of low quality leadership and information mismanagement. Two years to revive whatsoever hope remains in this change administration. Two years to show that while the immediate past government had to be voted out, the “change” administration was worth the mercurial efforts it took to install it. I would really love to be optimistic, but there are at the moment sadly little reasons to be so.

One thing is clear; never again should we allow ourselves to fall into a scenario where we practically have no choice. For one, re-electing GEJ was never an option!

Saheed Animashaun (@ani_gene) is a social commentator. He can be reached via saheed.animash@gmail.com 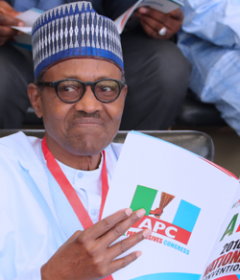